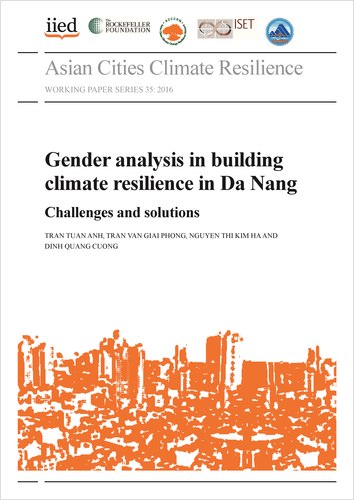 Although the legal framework for gender equality exists in Vietnam, gender mainstreaming in climate change planning and action have not yet been fully realised and addressed by local actors. In Da Nang, a gendered view to climate resilience building was also a new approach for the city and local authorities and vulnerable communities. This study examines the gender issue through the climate resilience lens within the context of Da Nang to see how gender and its link to climate change was locally perceived and at what level(s) gender equality and women’s role were appreciated and incorporated into climate change planning and action.

The study applied the Resilience Framework provided by the Institute for Social and Environmental Transition (ISET) to examine the linkages of gender and climate change resilience building. Three key components of this Framework, Agent, Institution and System, were then used to analyse the data collected from the stakeholder consultations and field survey. The key research findings include (i) in Da Nang, gender relations have recently been given a positive signal; (ii) the lack of specific instructions on gendered relations is likely to cause local actors to underestimate the importance of gendered interventions in practice; and (iii) the greater vulnerability of women is not merely due to social or gender biases but also because of their own physical weaknesses.

Three important policy implications generated from the study are (i) the necessity of improving women’s capacity to address their vulnerability; (ii) the necessity of having supportive mechanisms to enable full participation of women in planning and decision making; (iii) the necessity of integrating gender-sensitive indicators into plans and strategies to guide gendered interventions in practice.