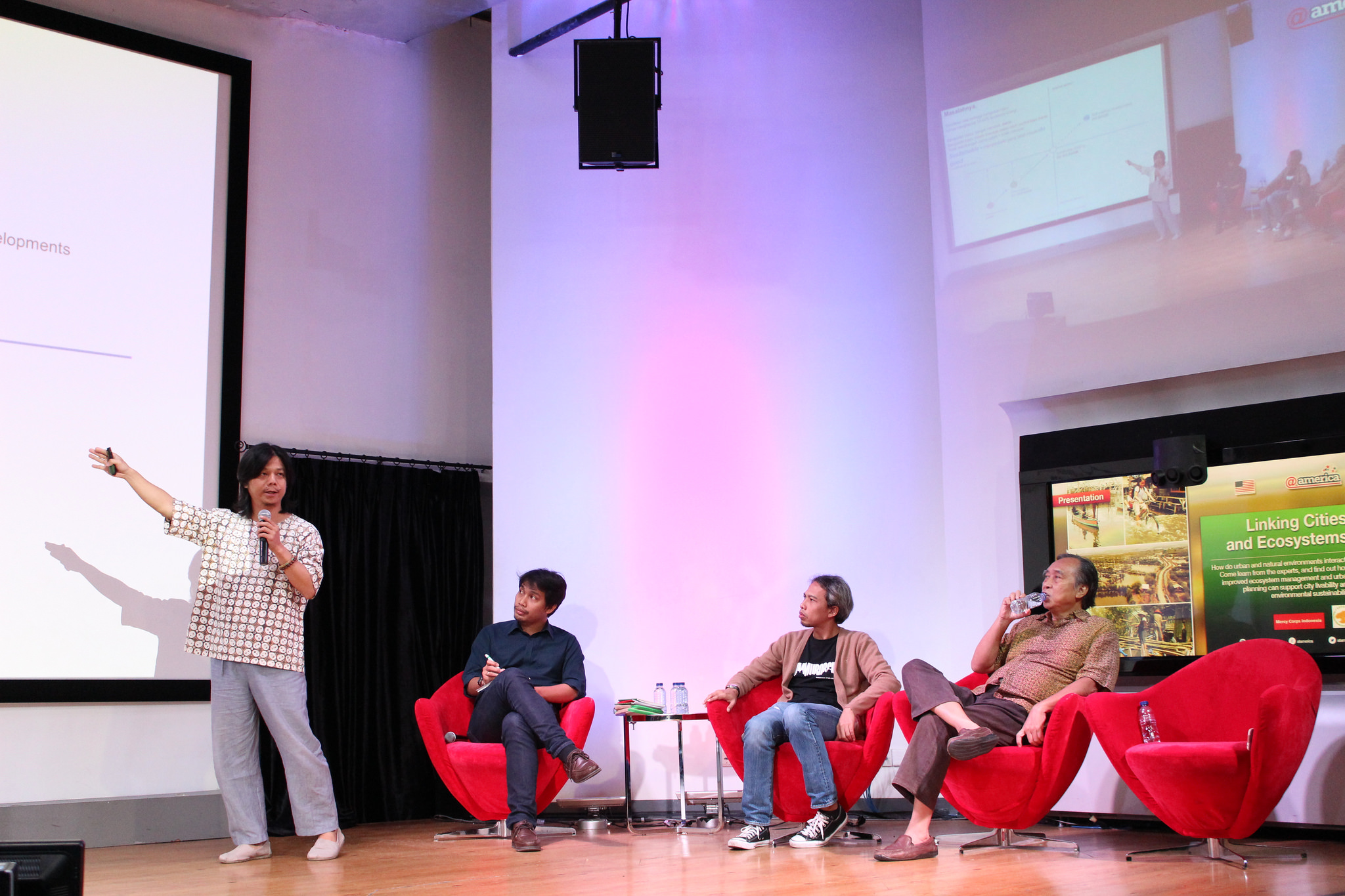 During this talk, ACCCRN discussed issues related to urban and ecosystem management in cities and surrounding areas, also the need for institutional support for the two-way interaction of urban activities and ecosystems.

More than half the world’s population now lives in urban and urbanising areas. Asian cities lie at the heart of this growth. Yet these cities are particularly vulnerable to the impacts of climate change as they constitute complex socio-technical systems in rapidly changing physical environments. A critical issue is that few municipal governments have jurisdiction over the entire ecosystems they both depend on and affect. Yet as cities expand, gradual changes in land use and occupation transform wider ecosystems.

Moderated by Nyoman Prayoga from Mercy Corps Indonesia, the talk brought three resource persons to share their experience and opinions on the topic.

Using Jakarta as a study case, Glaudy emphasized how the development trend shows the lack awareness of ecosystem service protection. The vast urbanization and massive development have left many complex urban problems in Jakarta, which also make this city at high risk from disaster.

“We should be looking at all aspects of development, including ecosystems and socio-economic,” said Glaudy.

He also mentioned about how development should be paying attention to its trans-boundary impact. Land use changes in upstream areas of the basin alter hydrological behavior and result in flooding in downstream areas, which happens to Jakarta.

“Whether the government likes it or not, there are particular spaces that need to be protected to avoid bigger loss.”

Glaudy encouraged the audience to realize that we are not living in a solitary environment. The action of one activity may not only impact the place where we live in, but it may also impact other places, positively or negatively.

Following what Glaudy had explaind, Jo Santoso, Head of the Graduate Program in Urban Planning at Tarumanagara University also shared similar insights into the relationship between urban development and ecosystem.

Jo expressed his concern that education is one of factors causing the complexity of urban problems. The basic education system, particularly in Indonesia, doesn’t include urban issues as part of discussions or material. This leads to a situation where we see a problem after it’s occurred and we tend to look for ways to solve it instead finding ways to prevent it.

“A city is a socio-ecological entity. It’s a product of civilization. People are organized in communities, with their own interests and common value, institutionalized by rules and regulations to provide an appropriate living environment,” said Jo.

All of the challenges that occur in development, including the linkage to ecosystem services, lead to a concept that development practitioners should understand, which is ‘Urban Metabolism’.

Jo emphasized that in this era of growing and consuming cities, we should see a city as a metabolic system. City development needs resources to run its activities, which include natural resources provided by the ecosystem. The cost of exploiting natural resources would damage the ecosystem services and we don’t want to end up in situation where we don’t have enough supply of those resources and so causing an obstacle for city to run its activities.

This is portrayed as the urban metabolism where it will produce not only the development outputs, but also the ‘waste’ as residual impact which is often not considered much.

Not only talking in terms of the macro scale, Yu Sing, an architect from Akanoma Studio, was invited to share his experience in practical level of development that considers nature and ecosystem as an important aspect.

Yu Sing talked about how architecture can have an impact on many aspects in life and development. He explained how nature contributes to the development of the cultural community values and how such things are being reflected in the architectural concepts. He also talked more on the interdependency between nature, culture and architecture in his presentation. There are too many compromises in development, prioritizing economic benefit way above the losses and costs to the ecosystem.

“It is sad to realize that architecture is also part of capitalism that has damaged our ecosystem,” said Yu Sing expressing his opinion.

From his experience as an architect, Yu Sing shared several projects that he has worked on from a water sensitive house that built on stilt structure to restore the plot function as water catchment area to utilization of a house’s yard as mini forest. He tries to include ecological balance in his approach to design.

He encourages other architects to be involved in improving the quality of life in cities by promoting river restoration, supporting urban greening including at the household level, promoting water catchment area coefficient in building design, also encouraging creation, management, and preservation of blue space in form of river, lake, and wetland.

“In some cases, there is an additional cost to use an eco-friendly approach and technology in development. It depends on the perspective of how we want to invest in our city. There is also a bigger cost from development that does not consider the nature and the ecosystem services that exist. The impact might not be happening now, but it will be in the future,” said Yu Sing answering a question about the expense of applying eco-friendly approach in development.

The discussion also invited the audience to ask questions based on what has been presented by the speakers. There was a debate on how the political interest of our leaders is also one of the biggest factors that influences the way our development taking place right now. 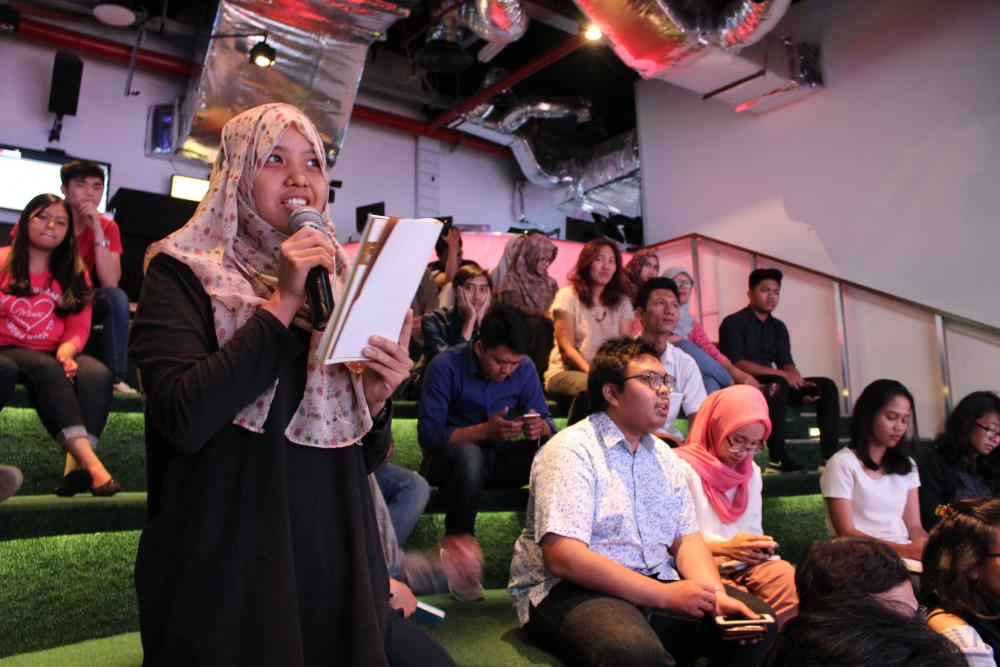 At the end of the discussion, Jo Santoso pointed out his message, “We are the inhabitants of city. We are part of the civilization where there is a way of life, value system developed by the inhabitants to create a city as a place of human coexistence with the common goal to achieve a better life, not degrading it.”