Publication
Case Study: Co-Management of Riverbank Erosion Control in Can Tho, Vietnam 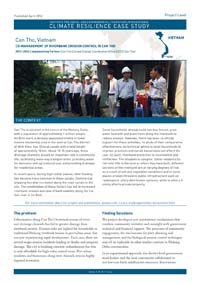 Download
(1,311 KB)
ASIA:Vietnam
Vietnam:Can Tho
AUTHORS:
ISET-International, CCCO Can Tho
Can Tho is situated in the centre of the Mekong Delta, with a population of approximately 1 million people. An Binh ward, a densely-populated middle to lower income residential area in the central Can Tho district of Ninh Kieu, has 10 local canals with a total length of approximately 10 km. About 10-15 years ago, these drainage channels played an important role in community life; facilitating waterway transportation, providing water for domestic and agricultural use, and providing drainage for residential areas.
In recent years, during high-water season, tidal floding has become more common in these canals.  Commercial shipping has also increased along the main canals in the city. The combination of these factors has led to increased riverbank erosion and loss of bank stability along the Cai Son river in An Binh.
Some households already build bamboo fences, grow water hyacinth and plant trees along the riverbank to reduce erosion. However, there has been no offiial support for these activities, no study of their comparative effectiveness, no technical advice to local households to improve practices and not all households can afford the cost. As such, riverbank protection is inconsistent and ineffective. The situation is complex. Some residents do not hold title to the land on which they have built, different sections of the riverbank are at varying degrees of risk as a result of soil and vegetation conditions and in some places erosion threatens public infrastructure such as roadways or utility distribution systems, while in others it solely affects private property
TAGS:
Climate ChangeDisaster Risk ReductionFloodRisk ReductionWaterCity StudiesResilience StrategiesTechnical DocumentWorking Paper
874 reads . Report this content